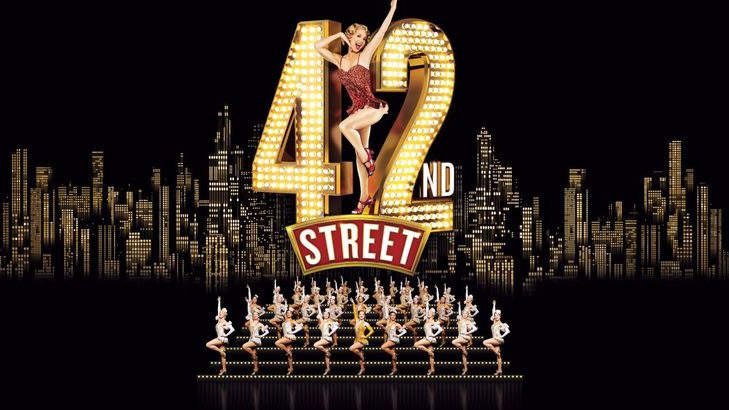 ★★★★★
“Achingly beautiful revival of an American classic”
The Telegraph

This legendary musical stars national treasure Bonnie Langford as Dorothy Brock with music and lyrics by Harry Warren and Al Dubin.
★★★★★
”Utterly moreish extravaganza of glitz”
The Times
42nd Street tells the story of Peggy Sawyer, a talented young performer with stars in her eyes who gets her big break on Broadway. This is the largest ever staging of the Tony® Award-winning musical, and featuring iconic songs 42nd Street, We’re In The Money and Lullaby Of Broadway, this is pure musical magic on the big screen.
The stage production was produced by Michael Linnit and Michael Grade. It was filmed live for the cinema screen at the Theatre Royal, Drury Lane in November 2018 by BroadwayHD, the US-based streaming service for live theatre. Ross MacGibbon directed the filmed version in collaboration with the late Mark Bramble, filming in 4K with 8 cameras at three separate performances to capture the spectacular scale of the stage show.
Bonnie Langford said, I’m so proud that this great production is now going to be screened in cinemas, reaching more people across the UK and Ireland than ever before. 42nd Street has been a part of my life since my twenties when I first played Peggy Sawyer and then a whole 25 years later I returned as Dorothy Brock to Theatre Royal Drury Lane. It feels like the perfect conclusion to a joyous run.”

Movie Night: Downton Abbey (Cert:PG)
The continuing story of the Crawley family, wealthy owners of a large estate in the English countryside in the early 20th century.
Expired

Movie Night: The Favourite (Cert:15)
A burgeoning friendship will not let woman, man, politics or rabbit stand in her way.
Expired
This website uses cookies to improve your experience. Opt-out if you wish. AcceptReject Read more
Cookies Policy