The King and I. A second show, first showing sold out! 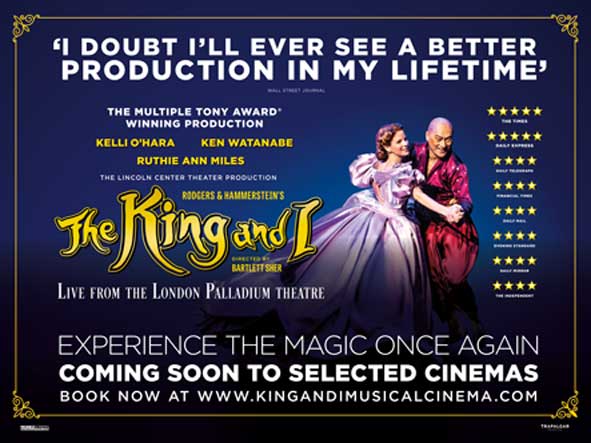 The multi-award winning and critically acclaimed Lincoln Center Theater’s production of Rodgers and Hammerstein’s The King And I recorded live at London’s iconic Palladium returns to the big screen. Reprising her Tony Award-winning role, “Broadway musical’s undisputed Queen” (The Sunday Times) Kelli O’Hara (Anna) takes to the stage alongside Tony and Oscar nominee Ken Watanabe (The King) in a “powerhouse” (The Times) performance. Also returning to her Tony Award winning role as Lady Thiang is Ruthie Ann Miles.

Set in 1860s Bangkok, the musical tells the story of the unconventional and tempestuous relationship that develops between the King of Siam and Anna, a British schoolteacher whom the modernist King, in an imperialistic world, brings to Siam to teach his many wives and children. With one of the finest scores ever written including Whistle a Happy Tune, Getting to Know You, and Shall We Dance, and featuring a company of over 50 world-class performers, The King and I is a testament to the lavish heritage of gloriously romantic musical theatre – it is the greatest musical from the golden age of musicals.

The Victoria Halls complex is now open and operating as a Covid-19 Secure venue.

Tickets available from Ticketsource and the Hall administrator. No tickets sold on the night.
Tickets will be limited to enable social distancing and they will be numbered.

Please sanitise hands at entrance. Masks must be worn in the foyer. if you purchase a drink at the bar you will not have to wear a mask whilst drinking in the hall.